My friend Liz and I recently attended Mickey’s Very Merry Christmas Party in Walt Disney World. I’ll be breaking down my favorite and least favorite parts of the party! Enjoy! 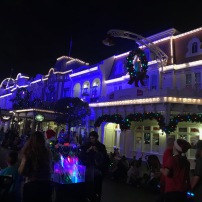 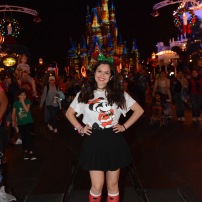 Processed with VSCO with c1 preset

Once Upon A Christmas Parade 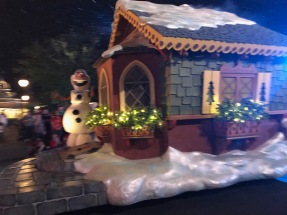 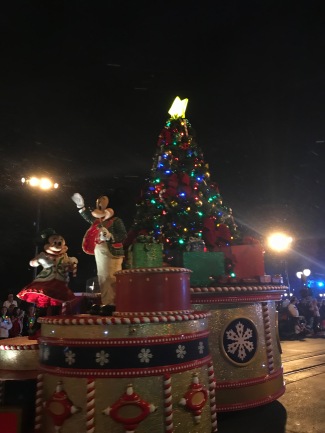 You definitely won’t want to miss this. Liz and I found a good spot right around the entrance to Main Street USA. I recommend you arrive about 45 minutes early to secure your spot. There are two parade runs, 8:45 PM and 11:00 PM. We watched the 11:00 PM run and it worked out pretty well with our night. This was actually the last event of the night for us. Be advised that if you pick a spot by Main Street the parade won’t get around to you till about 20 minutes after it begins. The parade is marvelous! All the floats are beautifully themed and decorated. This parade was one of my favorite parts of the night. Some of the floats and characters even take your breathe away. The characters are incredibly interactive with everyone which just adds to the fun!

This firework show is absolutely beautiful. To be honest, I enjoyed it more than Happily Ever After. They only show this once throughout the night at 10:00 PM. I suggest arriving 45 minutes prior to the fireworks starting to secure a good spot. Liz and I got a spot around the Walt & Mickey statue. The view from there was great! Not too close and not too far. Try to get a spot around there of you can. The music along with the reflections on the castle are wonderful. It’s truly a gorgeous show that encompasses the wonderful Christmas season. Do NOT miss this. Especially because it only happens once throughout the night!!

This show was cute. Although, not a must-do for me, personally. If you have kids then yes, watch this show. It’s adorable, includes a lot of characters and popular Christmas music. Kids can jump around to the familiar tunes and enjoy seeing some famous characters dance on stage. If you are not attending this event with children, don’t bother. Like I said, it is a cute performance, but not something I would want to watch again. There’s also a song in there centered around cellphones which, to me, is not very holiday-oriented. It throws off the show a bit. I understand they’re trying to be more modern, but I didn’t like it.

I spent about 10 minutes here. This is definitely an event for children. The kids would have fun dancing around with polar bears and reindeers. Adults, not so much. It’s a cute concept, but not so enjoyable for me. 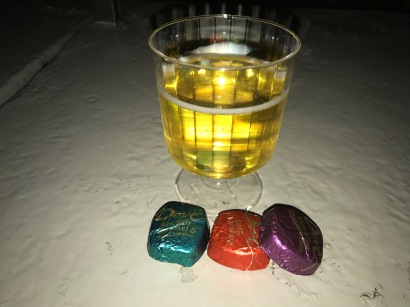 Okay so this was one of my favorite parts of the party!! Who doesn’t love unlimited holiday-themed goodies? There’s a number of complimentary drinks, cookies, & snacks around some areas of the park. The best part is that it is unlimited! If you really want, you can have 10 cups of eggnog (which was delicious). The cookies around the park was also very yummy. So be sure not to fill up on dinner because you’ll want some room to try each complimentary goodie! 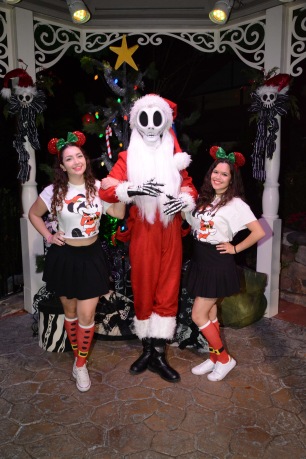 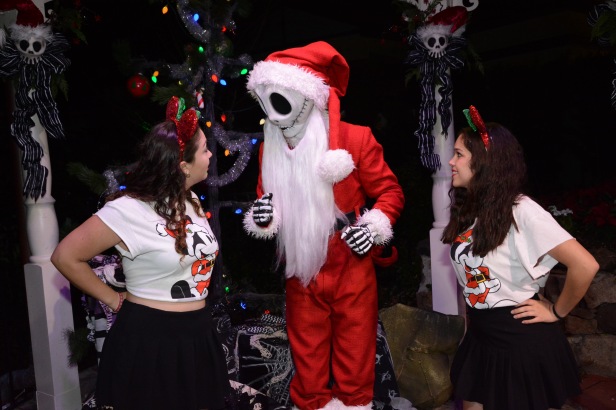 There are A LOT of special characters out during this event. Some of the ones Liz & I saw were all seven dwarfs, Scrooge McDuck, Minnie & Daisy, Sandy Claws, Belle, Prince Eric & Ariel, Cinderella & Prince Charming, and Aurora & Prince Phillip. The map does not tell you exactly where these characters are. It’s your job to find each one. The map also doesn’t mention which characters are out. So you may just stumble upon someone you were not expecting. Sandy Claws had one of the longest waits, but we went to the Halloween party earlier this year and were aware of this. So we ran to the his line about 30 minutes before he came out. We only waited 25 minutes before we were able to meet him. Be advised the line can get up to two hours long. He is a fun character to meet though. We also met Belle, who’s line was incredibly short. This was due to the fact that no one knew where she was! Minnie & Daisy also had an incredibly short line, but we didn’t wait it. So be on the look-out for characters around the park. You never know who you might see.

The party was a lot of fun. It was enjoyable and the theming was incredible. The only thing that would have made it better was if it was a bit cooler. I do have to say I don’t believe it was worth $105, if you are going to go, go in November. Tickets are cheaper during that month. Merry Christmas! Please let me know if you loved this article!

One thought on “Review of Mickey’s Very Merry Christmas Party”